You can tell if someone has an eating disorder just by looking at them.

False: You cannot tell if someone has an eating disorder just by looking at them.  I cannot tell you how many times people say- that person is fine, he/she’s not skinny enough to be sick.  Wrong, wrong, wrong!  This belief continues the notion that you have to be underweight to have an eating disorder.  The reality is people with eating disorders can be underweight, normal weight, or overweight.  Individuals with eating disorders do not always look sick.  In fact most people don’t look like they have an eating disorder.  According to research only about 10% of individuals fall into the severe underweight category the remaining 90% do not.  The problem with this belief is that someone could have a very severe eating disorder and not seek treatment because they think their weight isn’t low enough or their family and friends think they look just fine.  It prevents people from getting the help they need.  I also see this with individuals needing a higher level of care- where they need to go to inpatient or residential treatment where they get 24 hour care and they keep saying- I’m not sick enough, I’m not skinny enough to need more help.  The reality is the severity of an eating disorder isn’t necessarily dictated by size and you cannot tell if someone has an eating disorder just by looking at them.

Only young women get eating disorders.

False:  Historically young, white, women of mid to upper socioeconomic status were the primary individuals diagnosed with an eating disorder.  However, this is not the case anymore!  It turns out that eating disorders do not discriminate.  Eating disorders affect men, women, boys, girls, all ages, races, ethnicities, and social classes.  The scary thing is, the more research we conduct, the more we learn that the prevalence is actually higher than we previously thought.  Historically we have always thought that men account for 1% of eating disorder cases but new research is indicating it could be as high as 25%.  Additionally, we have thought that age protected women from eating disorders.  In fact, there was this belief that if you were a woman, you got to the age of 30,  and you were never diagnosed with an eating disorder, then you were safe.  Turns out this is not the case anymore.  In one treatment center alone there was a 110% increase in the incidence of eating disorders in women over the age of 35.  Treatment centers are now seeing patients in their 60s for treatment of significant life threatening eating disorders.  Sadly their incidence is also increasing at younger ages- I recently read about a girl in kindergarten diagnosed with anorexia nervosa who was afraid to eat because she did not want to become fat. A 6 year old girl afraid of becoming fat! When did 6 year olds start worrying about their weight and size?!  Although this is just one story, it is not the only one.   As a professional I can’t help but believe that this incidence will only continue to increase and the research sadly supports this- 81% of 10 year old girls are afraid of becoming fat.  The belief that only young women (ages 16-25) get eating disorders will only prevent individuals from getting the help that they need and keep them feeling miserable for longer. 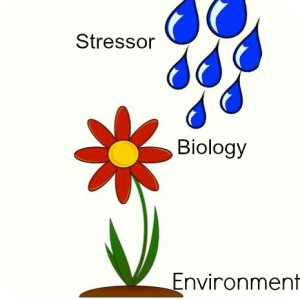 Eating disorders are a teenage phase or a lifestyle choice.

False:  Eating disorders are serious mental illnesses, in fact they have the highest mortality rate of all psychiatric illnesses.  They are not a teenage phase that can be grown out of, they are not lifestyle choice where someone can just choose to get better.  Eating disorders are brain based, biological illness that are extremely complicated.  They follow a bio-psycho-social model that basically means there are multiple different factors that play into why someone develops an eating disorder and why they cannot just snap out of it.  Biology includes genetics, physical changes such as puberty or menopause; psychology includes life stressors, personality factors, coping skills; and social factors include the pressure to be thin, the media, etc.  I like to explain it like a flower- the flower is the biological component or individual genetics, the soil is the social or environmental component, and the rain that makes the flower grow is the psychological component or stressor that triggers the development.    The main thing to know is that eating disorders are complicated, they are not a choice or a phase, they are serious mental illnesses that require the appropriate, specialized treatment.  The perpetuated belief that they are a choice or a phase only prevents people from getting the help they need.

The good news is- most individuals who suffer from an eating disorder do get better.  They can live full, happy, healthy lives.  However, these beliefs- that you can tell if someone has an eating disorder just by looking at them, that only young women get eating disorders, and that eating disorders are a phase or a choice- are simply not true.  They only prevent people from getting the help they need and reduce the seriousness of the problem.  So please, remember these facts.  By doing so, you can actually help people get the treatment they need.  You can be the one who helps to reduce the pain, guilt, shame, and hurt that these individuals feel every day.