Do you know the diet dance?  It goes like this: buy a diet book, buy some supplements, go on a diet, lose five pounds, gain it back, plus 3 pounds 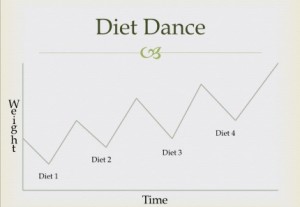 more.  Go on another diet, with different rules, lose 10 pounds, gain it back, plus 5 more.  Go on another bigger, stricter, more severe diet, lose 20 pounds, gain it back, plus 10 more!  Over and over this cycle repeats with weight continuously creeping up not down. This is a familiar dance and a costly one too.  In 2012 Americans spent 61 billion dollars in the weight loss market alone.

60 billion dollars is a lot of money!  According to forbes online 60 billions dollars is enough money to fill up a very fuel efficient car like the Hummer with enough gas (at $3.00 per gallon) to drive around the equator 8.4 million times.  It’s also enough money to fund the American Cancer society for 103 years or the American Red Cross for 17 years.  Instead all that money- 61 billion dollars- is funneled into the weight loss industry built on the false belief that weight loss is fast and easy.

Sadly, most of the 60 billion dollars in the weight loss industry is spent in vain as diets don’t work.  Think about it, if one diet actually delivered what it promised there would be a collapse of the market due to creation of a monopoly.   There would be one diet that worked and everyone would go on it.  Instead, we have a competitive $60 billion dollar market with people dieting on average 4-5times a year.  Each time they are looking for the diet that actually promises results and will help them lose weight and keep it off for good.  Unfortunately, for most people, this does not exist.  Research shows that 95-98% of all diets fail. After the diet fails, the dieter then assumes responsibility for the diet failure and the diet dance begins again.  Over time this leads to weight cycling, body disconnection, and distrust of food.

In 2007 the Center for Medicare searched for a method of effective obesity treatment.  Their goal was to determine how effective diets were as a treatment option for obesity, and they wanted to find the best weight loss method to recommend to Medicare patients.  They conducted a thorough literature review examining a total of 31 various study designs with a minimum follow-up of 2 years.  What they found was that most every diet studied resulted in initial weight loss.  In fact, the average weight loss was about 30 pounds and was typically associated with improved health parameters like blood pressure, triglycerides, and cholesterol.  However, by 2 years post intervention up to 64% weighed more- meaning that 2 years after the diet ended the majority of the people weighed more than when they started the diet.  The authors of the study concluded that “men and women who had participated in formal weight loss programs gained significantly more weight over a 2 year period than those individuals who had not participated in such a program.”   Furthermore they found that attempts to lose weight were related to future risk of major weight gain!  In the end the researchers were unable to recommend a diet method for effective obesity treatment.

With summer just around the corner and swimsuit season ahead, the weight loss industry has ramped up advertising with hope that you will buy into the belief that you must lose weight to feel good at the pool or beach.  It seems like you can’t turn on the TV or the radio without seeing or hearing an advertisement for quick, easy weight loss.  As a consumer it’s hard not to buy in to that belief and people are willing to pay big time.   Like fortunetellers, palm readers, and astrology hotlines the weight loss industry sells hope to desperate people.

Instead of choosing to engage in a market that sells false hope it’s time to get out- to do something different.  It’s time to stop trying to buy will power and investing in hope.  Instead it’s time to focus on taking good care of yourself- meaning that  you can eat the foods you enjoy, find exercise that is fun (that’s not an oxymoron), accept yourself the way you are and stop feeding the diet industry’s false economy.  It’s hard, but do the difficult work of learning to listen to your body and pursue things you enjoy- doing so results in a happier, healthier life and gets you out of the diet dance (continued weight gain).

2 Responses to “The Diet Dance”

November 30, 2017 at 3:49 am, Are You Making This One Mistake Over The Holidays? – MySignatureNutrition said:

[…] pretty mind blowing to think about it like that, but the reality is dieting causes weight gain. Think about it- when you know you’re going to start a diet soon, how is your eating different? […]

[…] dieting and diet culture.  There is abundant research that diets do not work long term, that 95% of diets result in regain of the lost weight and that 66% of people gain back more weight th…  Because diets don’t work long term (defined as greater than 2- 5 years) then what you […]