We don’t all Binge Eat on Thanksgiving!

I can’t believe that Thanksgiving is already here!  Where did time go?  It’s usually around this time of year that I start seeing news articles and stories pop up that attempt to steal the joy from Thanksgiving by focusing on how many calories people eat, how “bad” the food is, how it’s too much, that the weight gain season has begun, that remind shame you about weight gain, etc.  The Thanksgiving headline that annoys me the most says something like “America Binges on Thanksgiving.”  Repeat after me: “We do not all Binge Eat on Thanksgiving.”

In addition to eating a larger amount of food, a person must feel out of control or like they cannot stop eating.

This must also be accompanied by at least two of the following:

-eating much more rapidly than normal (not tasting the food)

-eating large amounts of food when not physically hungry 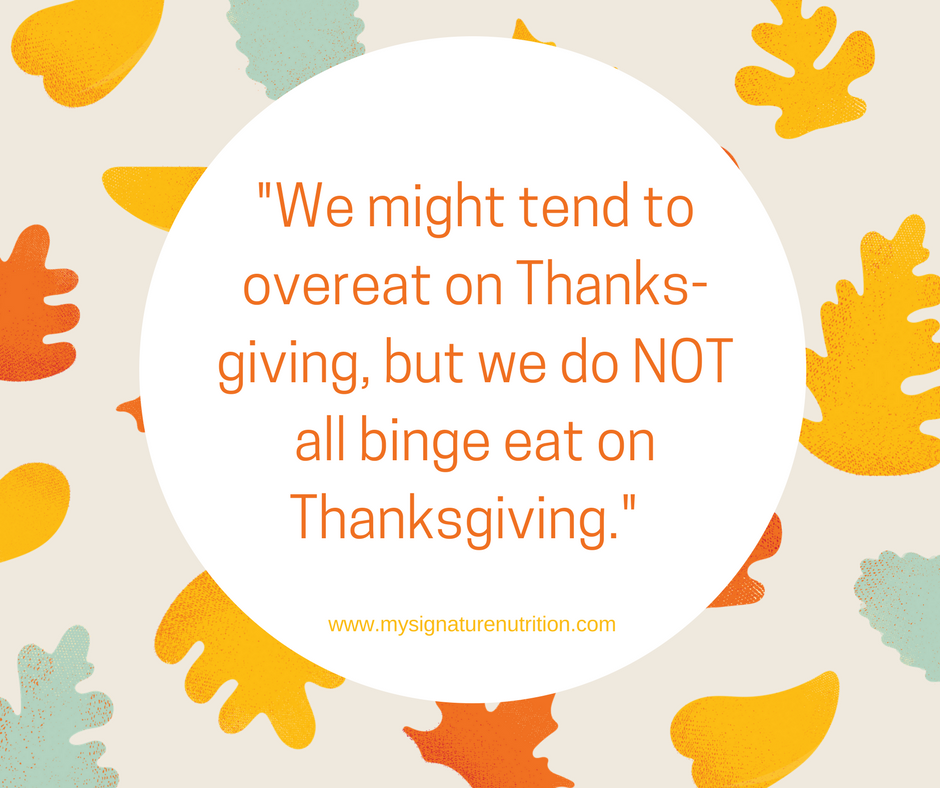 While most people enjoy the food on Thanksgiving and do not want to stop, it isn’t the same thing as feeling unable to stop.  When someone is unable to stop eating it is an out of control, panicky feeling/experience with (typically) the need to hide how much you’re eating because you feel guilty, embarrassed and ashamed.  Some people may also feel uncomfortably full and guilty after eating on Thanksgiving, however it still doesn’t mean that you binged.  The first criteria of amount and circumstances automatically rules Thanksgiving out as a binge.

This isn’t to say that people don’t binge eat on Thanksgiving.  It can happen.  First it would have to be a larger amount of food than most people eat on Thanksgiving, you would have to feel out of control- unable to stop, maybe even in secret (everyone else is watching the big game and you’re hiding in the pantry finishing the pie), eat until uncomfortably, and feel depressed or guilty afterwards.

The idea that America binges on Thanksgiving makes light of a serious eating disorder that more than 13 million Americans struggle with.  It says- hey your problem isn’t for real, you just need to stop, you’re the problem.  The reality is binge eating disorder is for real and it’s a serious eating disorder that requires help!  Please don’t make other people’s struggles a headline, a joke, or a laughing matter.  Binge eating is serious and deserves to be treated like any other illness.  You sure wouldn’t see like this about cancer or heart disease- so let’s stop making light of this serious mental illness as well.  It just causes more shame and prevents people from getting help they need.