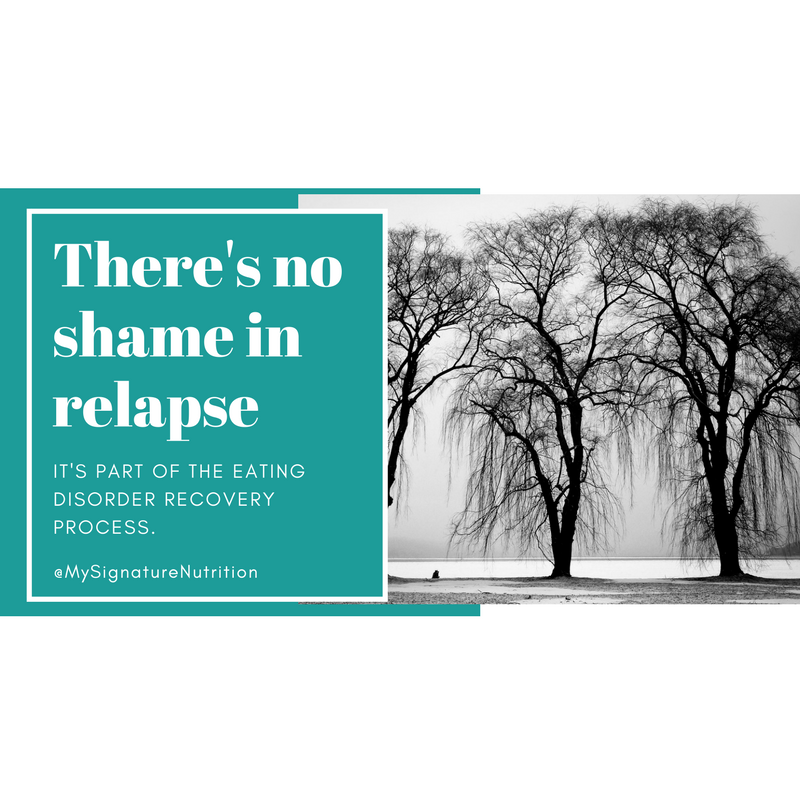 Eating Disorder recovery is a journey. It’s a process that takes time. It’s up and down and certainly not linear. When you’re living it, it feels like it will take forever. Sometimes you have those moments of hope, but then when a behavior creeps in or returns, that hope is quickly overshadowed by the shame of having a behavior. It’s really easy for thoughts to quickly turn to “I’ll never get well.” “I’ll be like this forever.” “I’m so stupid.” and there’s probably some mean, negative body comments peppered in there too.

Here’s the thing to keep in mind though, relapse and behaviors are part of the recovery process. Think about it, how can you learn recovery, or how can you learn any new skill for that matter, except by experience and doing?

Recovery isn’t just waking up one day and deciding that you’re not going to have an eating disorder anymore- that you’ll be behavior free and that’s it. That’s what people think will happen when they’re like “just eat,” or “go have that hamburger,” or “just stop making yourself sick, stop eating all that food.” Ugh. If it was that simple, then it wouldn’t be an eating disorder! Eating disorders are way more complicated than that, they’re not a phase or something to grow out of and you certainly don’t wake up on day and just decide you’re better. It wouldn’t be any different than telling someone with cancer to just “be well” and decide not to have cancer anymore. Comments about “just stopping” behaviors make me so annoyed because they undermine the complexity of an eating disorder and increase shame. This only keeps someone in behaviors!!!

Part of recovery is having eating disorder behaviors and learning from them. It’s part of the recovery process! This isn’t permission to just “go and use behaviors.” {I know you know that, but sometimes ED is manipulative.} This is permission to not shame yourself about having behaviors or a return of behaviors (relapse).

So here’s some thing to keep in mind about relapse: 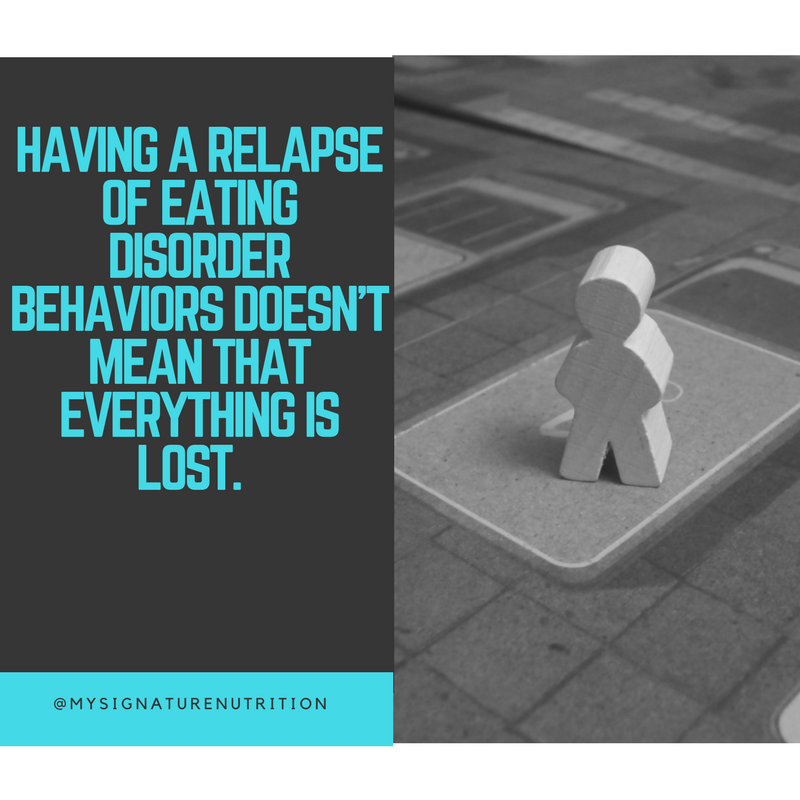 You’re on a hike in the woods going along your path. Sometimes the path is clearly defined and sometimes it’s harder to see. You’re sticking with your path, but then you come to a fork in the trail. Do you go right or left? From your vantage point the two paths look pretty much the same so you decide to go right. As you continue hiking down the path you notice how the light shines through the leaves, you hear birds singing, you notice the moss growing on trees. You continue on your path for awhile longer, but then it comes to a dead end. Was hiking down that path a waste of your time? NO! You had experiences and made observations that you might not have had if you hadn’t gone down that part of the trail. So what do you do? You turn around and hike on the trail to where the path’s divided and then you get back on the other path. Notice, when you join the other path you start where you left it. You don’t start the trail all the way over at the beginning- you start right where you left off and now you have meaningful experiences and valuable observations that you take with you as you continue on the trail. 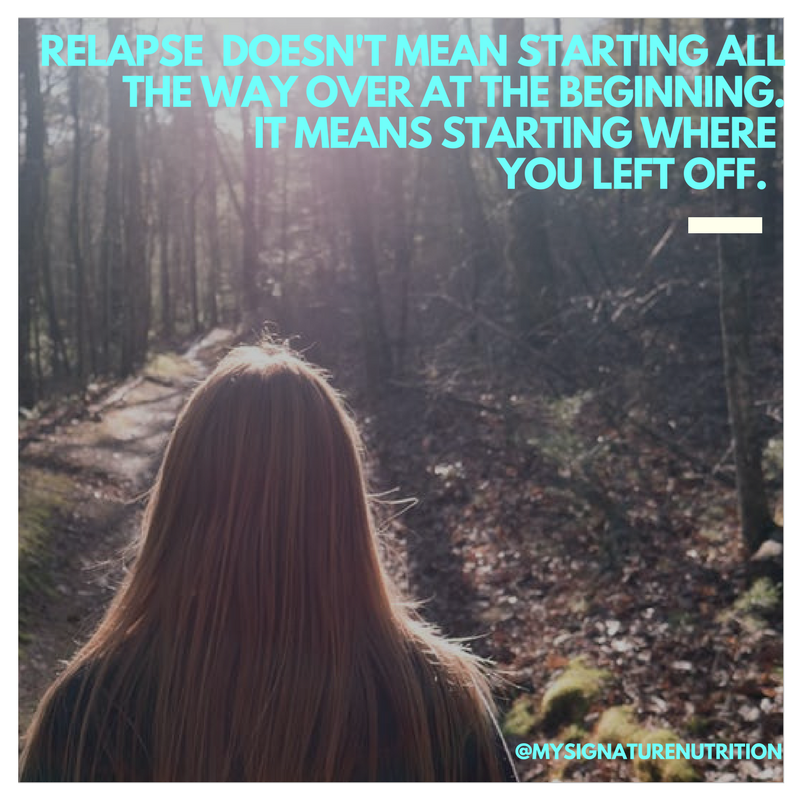 This is what a return of behaviors is like in the recovery process. It can be meaningful and valuable if you let it.

You could also think of recovery like a tree. If a tree doesn’t have deep roots then a strong wind can blow it over. Trees get stronger roots from wind. In fact, trees need wind to blow against them because it causes their root systems to grow deeper and stronger. The roots then support the tree as it grows taller and bigger. If there wasn’t wind to blow against a tree to help strengthen it, then the smallest storm would blow it over. Having a return of behaviors is like the wind blowing against a tree. It’s making you stronger even though it doesn’t feel that way. It’s helping you become deeply rooted so that you’re able to handle bigger storms that come your way. 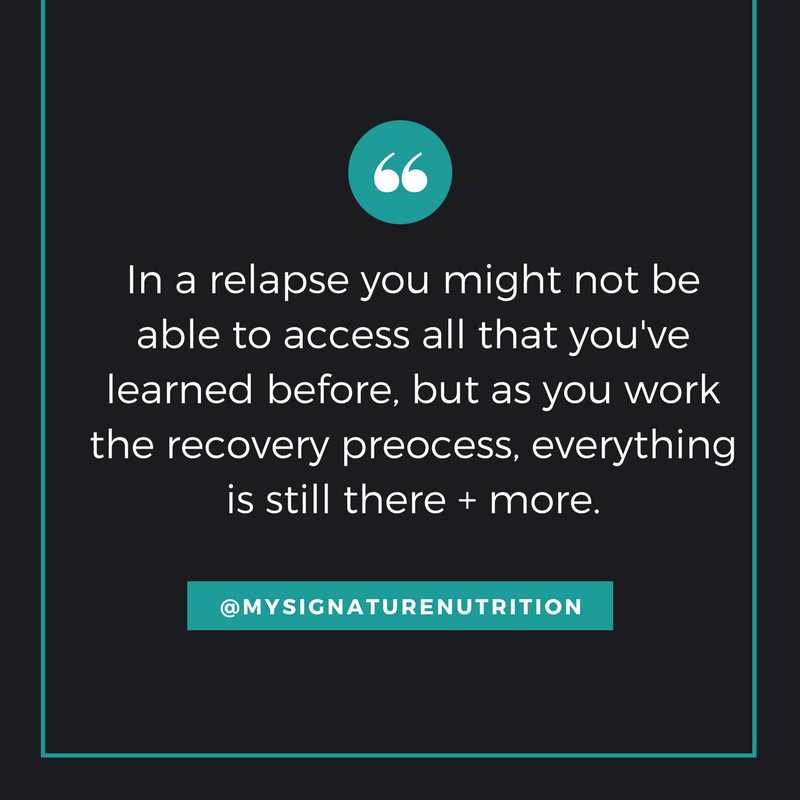 While it’s easy to feel upset and ashamed about having behaviors, especially after you haven’t had them for a long period of time, it’s okay. You’re okay. You’re not broken. Your work in recovery isn’t squandered. You still and will always have meaning and value just by being you.   So hang in there. Progress doesn’t always look like progress and behaviors are part of the process.

If you’re struggling with your eating or think you might have an eating disorder, please reach out for help.