A diet by any other name is still a diet

Over the past few years diet culture has slowly been usurping the word health as a another form of dieting. I know diet culture is sneaky, I know it’s insidious, but come on- does diet culture really have to steal the word health and healthy too? When did the pursuit for heath itself actually become unhealthy?   I’m not talking about orthorexia (an eating disorder defined as a fixation on healthy eating to the point that it destroys health and detracts from quality of life) but from the day to day diet culture MO that secretly shifted the focus off of weight onto lifestyle, clean eating, whole30, paleo, etc that say they are all about health but really are dogmatic eating styles that create restriction, elimination, guilt, shame, and cheat days while reinforcing good /bad, healthy /unhealthy restrictive thinking patterns.

Diet culture is sneaky because the shift away from using the words “dieting” and good /bad foods was subtle. It shifted to health/wellness and unhealthy or healthy foods- but these labels are the same thing- just using different words. There is no difference. There is still a label that says one is good and one is bad. Reality check: no foods are good or bad. Not a single food will make you gain weight or lose weight, or give you cancer or prevent cancer or give you heart disease or prevent heart disease. Not a single food in the world has that power.

Back to diet culture- this shift with thinking was sneaky because as diet culture moved away from dieting and restriction- it became all about dieting in the name of health- and oh by the way it’s not called a diet anymore.  Now it’s a lifestyle, but really it’s a diet. A diet is a diet whether you call it by another name or not.

Why does this matter? Because these restrictive eating patterns still predict weight gain. They still distort your relationship with food. They still make you feel like you are a failure for your inability to stick with the eating plan long term. They still increase anxiety about choosing the “right” food and guilt after eating if you chose the “wrong” food. They create reactive eating patterns of overeating followed by restriction followed by overeating and bingeing, increased weight focus and then starting the cycle over again. It’s relentless. This is diet culture.

I think the sneakiest part is the whole group of people who don’t diet, but just eat clean. Just follow a lifestyle plan. Just detox or cleanse for 30 days or so. They will always say that it’s not a diet. It’s not overtly about weight, shape, or size. It’s just about being healthy. The elephant in the room is the fact that all these eating patterns create a system to label foods as good or bad, restrict foods perceived as bad, increase food focus, increase guilt after eating foods perceived as bad, and are still unsustainable long term. It’s this really sneaky part of diet culture that I dislike the most. I know there are people who won’t agree with me, but this is still a diet and the disbelief is a prime example of the insidious nature of diet culture.

Tired of feeling trapped in diet culture?  Meet Body Guard: Defense Against Diet Culture- my soon to be released 10 module course to help you feel confident with your eating and defy diet culture! 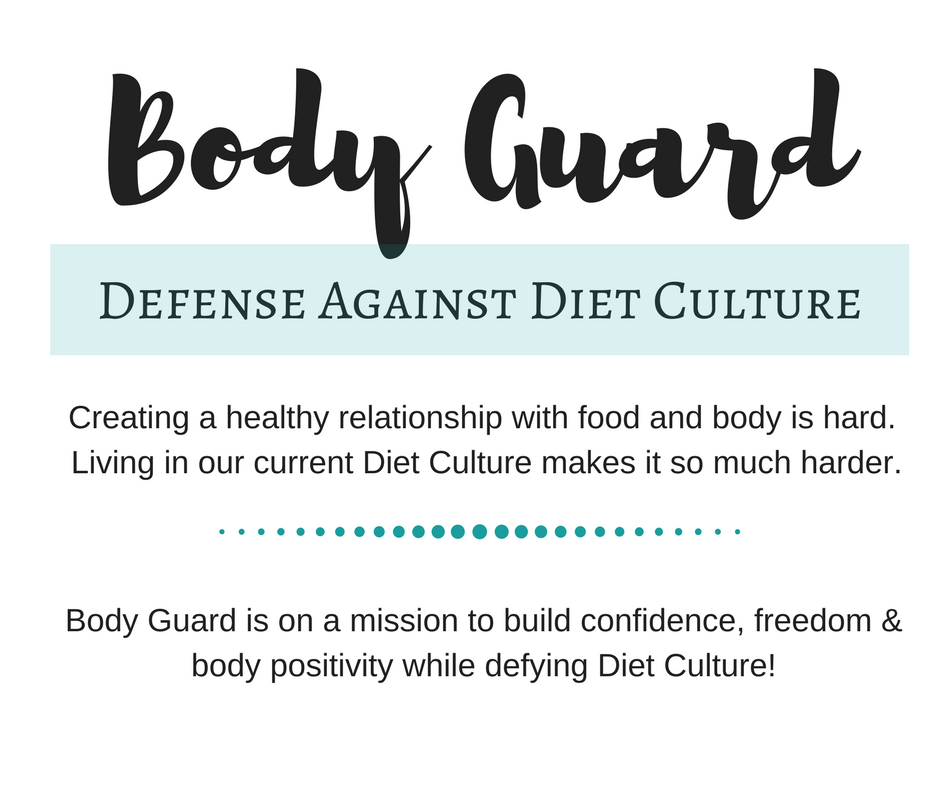 February 03, 2019 at 4:20 am, Intuitive Eating Is More Than Hunger & Fullness – MySignatureNutrition said: