The Legacy of Dieting 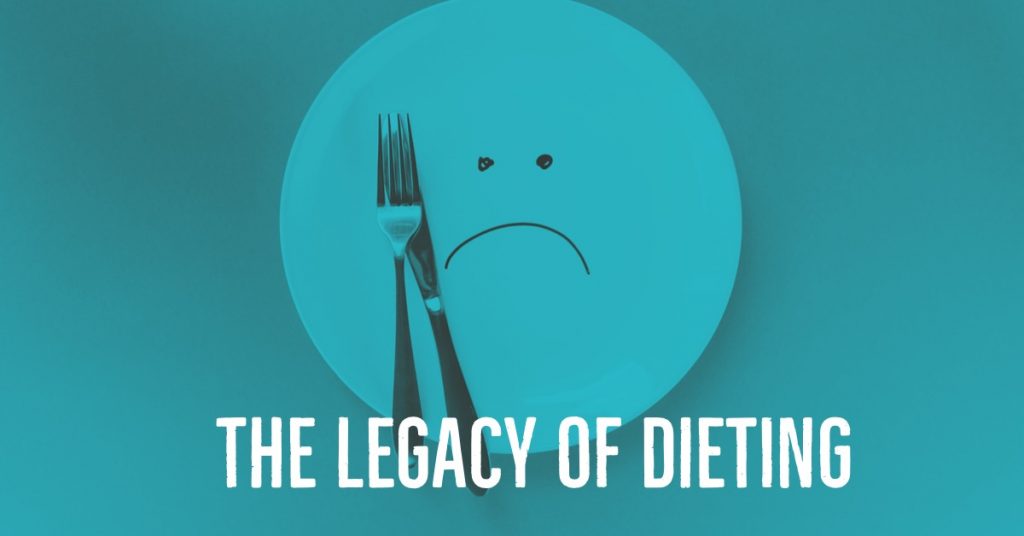 Remember that part in the movie Forrest Gump where Lieutenant Dan is talking about how it’s a tradition in his family to die in combat? He describes how his father, and his father’s father, and his grandfather’s father (and on and on) were killed in war; that this is the legacy in his family.  He was even upset that he had not been killed in combat! As someone watching the movie (who also had a brother in the military) I remember thinking why in the world would you want to continue that tradition? One of pain, misery and loss?  As odd as it sounds, it’s not really that different than the legacy of dieting I see passed down in families from generation to generation- what I have dubbed the legacy of dieting. 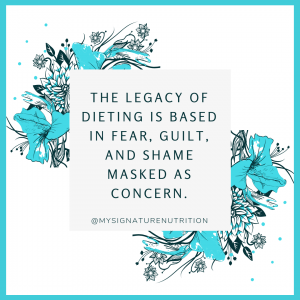 The legacy of dieting goes something like this: Grandparent (usually through the mother’s side) is taught to dislike their body, diets and restricts eating, focuses on body and weight loss, makes negative comments about their body (and other people’s bodies), reinforces body dislike and distrust, focuses on their child’s body and says- “be careful you don’t want to be like me,” puts child on their first diet, bonds over dieting together and body dislike. Child then grows up hating their body, confused about food and only knows restriction, dieting, body dislike, and fear of gaining weight as normal. So they too stay stuck in this cycle and then passes it on to their children and their children’s children and so on. It’s extremely sad and extremely common!

Research supports that the legacy of dieting is a real phenomenon but more eloquently calls it “intergenerational transmission of dieting.”  A recent study published in April of 2018 found that when a parent encouraged a child to diet it impacted not only the child, but that child’s children as well (which just continues the cycle). 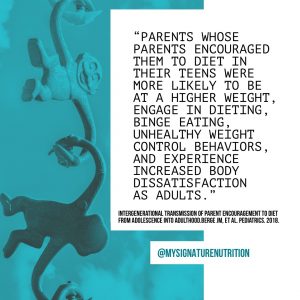 If you think it’s a good thing to be focused on weight and dieting, read here and here, but also know that parents whose parents encouraged them to diet in their teens were more likely to be at a higher weight, engage in dieting, binge eating, unhealthy weight control behaviors, and experience increased body dissatisfaction as adults. I don’t think that’s really what mom’s are intending to pass on when they’re focused on their child’s weight.  I believe that moms (or parents in general) think that they’re helping their child have a better quality of life- not triggering a cascade of self hate, dieting, and worse health outcomes.  It’s this belief that they’re helping that makes the legacy of dieting so hard to stop. Of course no one wants to see their child suffer, so they keep doing what they know and the legacy continues.

The legacy of dieting is hard to stop because: 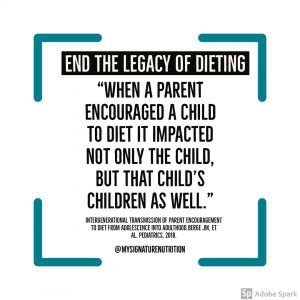 This creates a legacy that is difficult, but not impossible to break free from.  It also creates an opportunity that creates intergenerational freedom with food, improves body acceptance, and health. While it might be difficult to change, it’s definitely worth it.  So as I write this post near mother’s day I implore you to consider if you are (or were) a legacy dieter.  Think about what eating was like in your family growing up, about who made the most body comments to you- were they accepting or based in shame?  Spend some time journaling and reflecting on the following questions, then click over to my next blog on 5 ways to break the legacy of dieting for good.

Journaling Prompts to build awareness about your family’s legacy with food and body:

One Response to “The Legacy of Dieting”

Leave a Reply to If candy’s haunting you, here’s what to do – MySignatureNutrition Cancel reply